<— Mmmm…. soo yummy!! I honestly get such an intense high out of creating my own flavorful dishes. I feel myself come alive when I start mixing flavors and adding ingredients in order to get that perfect flavor. I honestly can’t help but think of the movie Ratatouille and his passion in the kitchen…. haha!

Okay, so, I don’t normally ever cook tuna. The only fish I stick with are wild Atlantic salmon and sometimes Mahi or snapper. However, I was really in the mood for some teriyaki tuna. Tuna normally has a bad reputation for high mercury contents. I will clarify though, that tuna found in restaurants is actually known to contain the HIGHEST amounts of mercury around. So, I never order tuna in restaurants, but I don’t mind WILD, YELLLOWFIN TUNA every blue moon. There are lots of health benefits, and it is loaded in selenium. So, don’t go making tuna every day, but every blue moon it’s oaky. 🙂

I will say, I had lots of fun creating this recipe. The GF pasta has a sweet taste and perfectly balances the flavor of the tuna. Plus, I soak the tuna in amino acids, which are very beneficial to your health. 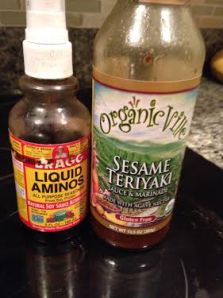 Marinate the tuna with the amino acids and teriyaki sauce
Bake for 15-20 minutes at 475, then turn on broil and let it crisp… unless you like it more raw.. then, cook for less time.
Boil the pasta while you cook the veggies in a separate pan with the coconut oil.
When the pasta is cooked, add to the pan of veggies.
Season with salt, garlic salt and pepper.
Pair with a salad and put the tuna over top 🙂